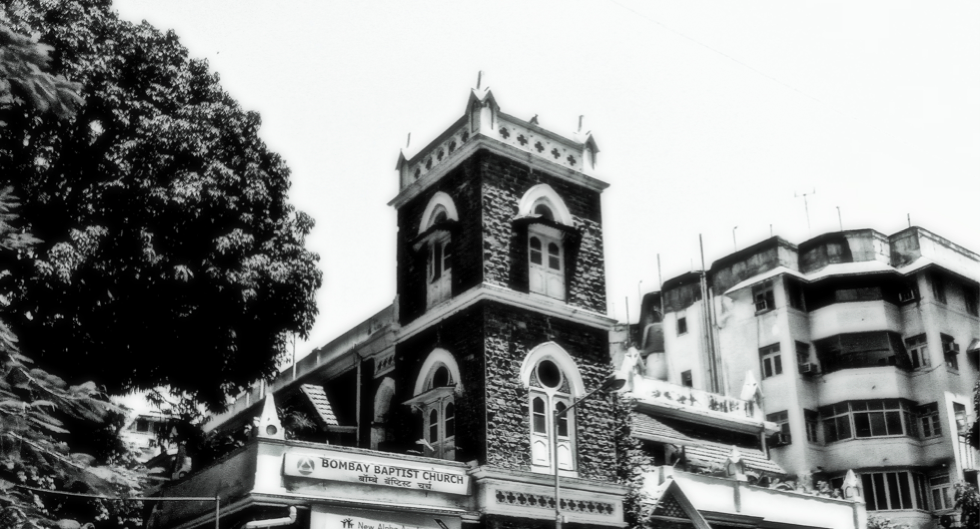 From a small beginning at Byculla in 1867, the church grew to be relocated first in Bombay Central and later to Colaba in 1911 where it stands today at the present site.

It was served by a number of pastors who were mainly Canadian and British. Their tenure ranged from a few months to a few years. During this period the church was a refuge to many passing folk from the Naval and Army personnel who were strengthened in their faith before they went on to their next posting. Some of the pastors were graduates from the Spurgeon’s Bible College. They were responsible for the numerical and financial growth of the church.

Many of the pastors or their families during late 1800s and early 1900s paid a high price, even as malaria and other sicknesses took their toll of these ministers. Some of them had to leave the country on board a ship on a stretcher, as either they or their family members were critically ill.

It was around the 1950’s that a need was felt to give formal theological training to new people. Thus a Bible college was established in the manse and was called the Berean Bible College named after the Jews of Berea who did not take Paul’s interpretation of scripture at face value but diligently checked the scriptures to see if he was right. The Bible commends them for this.

As the students grew in numbers the Bible college moved to Chembur, (a suburb of Bombay )and later to Bangalore  (South India) where it presently located and continues to train pastors. Pastor Sumitra Gaikwad who oversees our Hindi congregation at Colaba is one of the early graduates of this Bible College.

There were several pastors who in the late sixties and early seventies had heard news about the charismatic renewal in the west and they began waiting on God for the visitation of the Holy Spirit. And he did come. A number of people were filled with the Spirit.

Many a people who today are heads of major charismatic churches in the city of Mumbai and in our nation of India,  trace their experience of the infilling of the Holy Spirit in this Bombay Baptist church building, either in the main church hall or in the manse. This move blessed the city more than it did the local church

The Sunday school was very strong on Bible knowledge and would win almost every inter-church competition in the city that they participated in. Under guidance of Rev Lloyd Raine there was great ministry through song and music. Often people would hear God speak to them through solos, duets, or even the choir. During Rev Raine’s time the church consisted of older people while the Sunday school was for those under 15, many of whom never became members of the church. So a young people’s fellowship was started to keep them involved with God. This group of young people became the core who became part of the renewal.

Charles Lazaro came to the city in the early 1970’s as a worker of Youth for Christ, but soon felt the call of God to be trained at the South India Biblical Seminary. On his return, he was appointed as the next pastor of the church from 1973 to 1981. The church went through a period of renewal and revival. The team of deacons changed hands as younger but more spiritual joined the team.

This was the theme, which Pastor Lazaro emphasized. He began to lay stress on righteous living and commitment to the body of Christ. The faithfulness of the pastor was rewarded as God added new members and baptized them with His Holy Spirit in 1975. This was the second move of the Holy Spirit First being in 60’s. This time, however, the renewal stayed with us. The congregation saw a new expression of Christian Life and worship in the youth of the church. This caused integration of youth into the church. Later the same young people went back to the Sunday school to teach and the Baptist church became a family where every age group was integrated and accepted though the proportion of youth was large.

Members were encouraged to exercise their spiritual gifts during the worship. The choir too changed from being a band of talented singers to a group of worshipers. Talent was no longer the basis for entry, commitment to glorify God was. Therefore many who had no talent for singing were trained to be singers. Some took up playing instruments and became proficient in them.

As the influence of the church grew the pastor was invited to speak in many places. He planned to train members to preach and teach the word so that they could step in during his out of town engagements. He called this group of “men of the word”. Arthur Thangiah who is presently pastors our Tamil congregations is one of those who completed the course.

Towards the end of Pastor Charles Lazaro’s God led him and the church members to appoint Stanley Mehta as an assistant pastor to Charles Lazaro. Stanley Mehta was already being by Charles Lazaro, and he took over from him after Charles Lazaro went to Australia in September 1981. of the kingdom, which was a vision with Pastor Charles Lazaro, became the mainstay of Stanley’s ministry. As newly married couples moved to the suburbs new churches were founded, and now they number around 45 satellite churches in the city suburbs of Mumbai. The church is now and family-based. Today from this one church there are many church plants, numbering more than 70, running in different languages like English, Hindi, Marathi, Telugu, Malayalam, Punjabi Dogri, Sinhalese, Burmese & Tamil. Some leaders who have migrated to other countries have planted churches in other countries like Dubai, Sharjah, Nigeria, Sri Lanka and Myanmar. 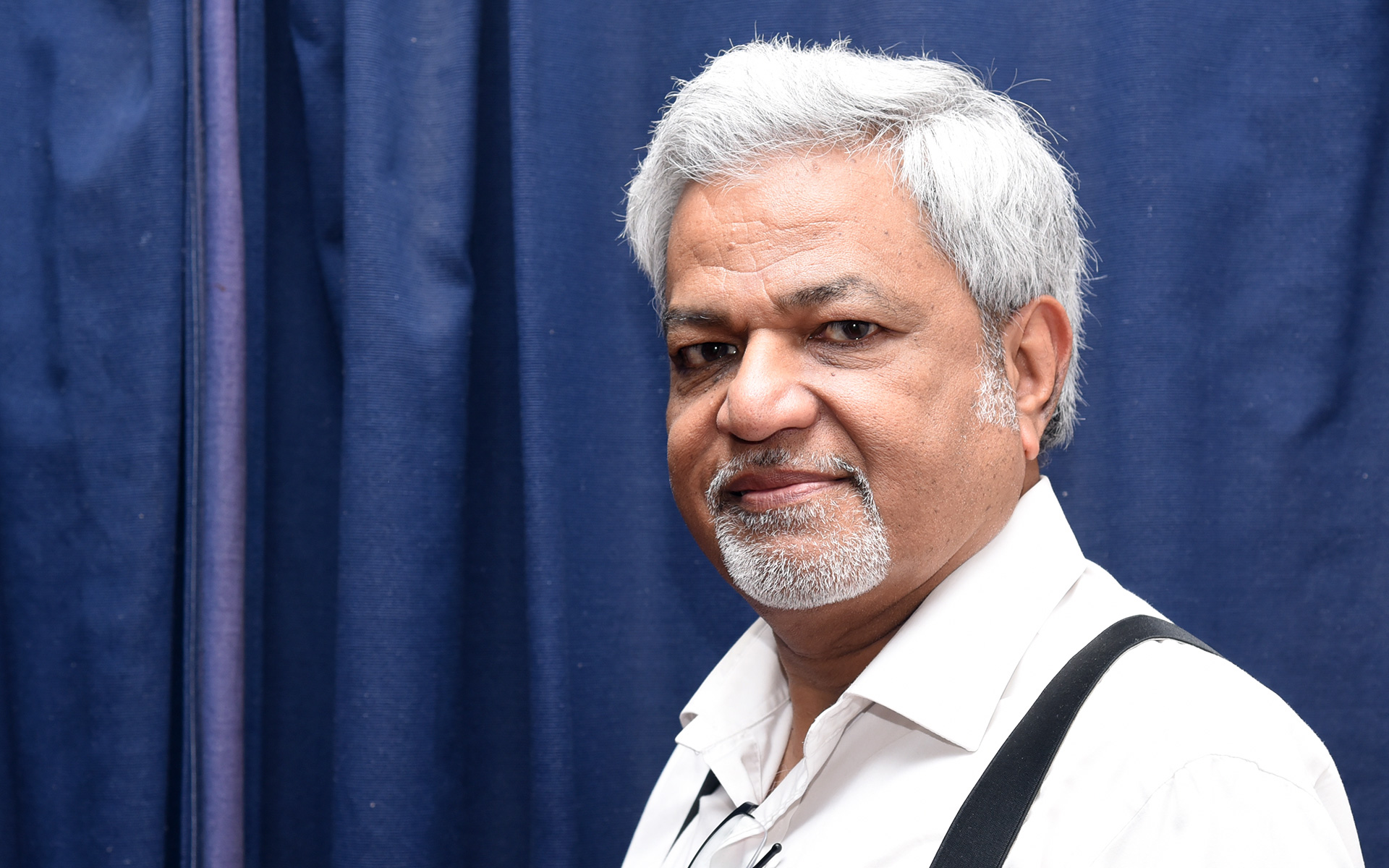 Another area of transformation was the finance of the church. This began with Pastor Charles Lazaro who emphasized the need to stand on our own feet rather than depend on the western money. He faithfully taught about tithing. Today the church & its religious activity is totally indigenous, supported by the tithes and offering of the members and receives no foreign funds.

In 1992 the church started ‘Antioch Training Center’ (ATC) which was a mini Bible school for its growing need. The students come from different part of the country. The faculty consists of senior proven mature pastors or trainers who are very well accomplished in their particular field or subject. Today, the former students of the ATC are seen to be planting and pastoring a number of satellite churches.

In 1984 the church acknowledged the apostolic oversight of Victor Gledhill. His input has caused the church to grow without any bottlenecks. Through his teachings, the church has understood the need to ‘love your neighbor as yourself’ and felt the need to minister to the destitute and outcasts of the society. As such a separate trust called ‘Sahaara Charitable society’ was established in 1994. Today it looks after orphans, teaches street kids in 3 places, runs 10 Balwadis for slum children (Balwadis are non-formal pre-primary schools), ministers to prisoners in 6 prisons, ministers to children from 7 Remand Homes (home for Juvenile prisoners), does computer training for prisoners in 4 prisons, runs 6 drop in centers forcommercial sex workers (CSW), ministers to eunuchs, conducts adult literacy classes, runs a half-way home for ex-prisoners, for ex-CSWs, visually challenged, ministers to school drop outs, ministers to visually challenged, and to those affected by Hanson’s disease (lepers).

The ministry is relationally associated with Salt & Light Ministries International of which Stanley Mehta is a part of the International council of Leaders. Barney Coombs is the founder of the salt and light ministries.

Each satellite church has its own unique structure but some of the activities are common, namely Sunday school for children, cell groups, foundation courses called ‘Foundations for Life’, advanced courses like ‘Discovering my Ministry’, ‘Discovering my Mission’, etc. the church has even written its own bible study material on various books of the bible and on specialized subject like ‘Living Life, Debt Free’, ‘Effective Praying’, ‘Spiritual Warfare’ etc. It periodically runs seminars for couples on enriching marriage, on parenting, on spiritual gifts, on counseling, on Stress free living, etc. Every year camps or retreats are held in rotation for youths, for children, for families, for leaders and for the whole church, adventure camps, in different languages and in different cities.